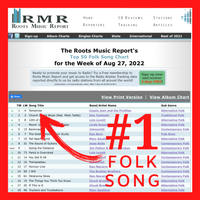 "Heart over Head" recently reached #7 on Roots Music Report's Folk chart, with "Tomorrow" as the #1 single. The album also reached #22 on Alt-Country, #125 on Americana, #31 on Euro Indie, and has 3 tracks in rotation on blues shows.

Cassie Jean Barbaresi and Rich Odato are the songwriting duo at the core of Cassie Jean and the Fireflies. Partners in life and music, they made a fateful decision in 2020 to completely forgo cover gigs and ride out the pandemic in their home studio. It wasn’t long before the quality and quantity of new songs–fueled by Cassie’s prolific lyric writing–outpaced the pair’s meager production skills. Enter Bud Snyder of Baysound Studios, a Grammy-winning producer/engineer known for his work with the Allman Brothers, Gov’t Mule, Gregg Allman and many others.

Cassie, Rich, and Bud recognized that they had something special that needed the right players and the right treatment. For primary recording, they added session and symphony orchestra bassist John Miller, along with YouTube star drummer Sammy “Barefoot” Warren. They recorded the songs at the storied Baysound Studios in Sarasota (formerly Tel-Star), with Snyder as producer/engineer, and Bob Frank as mixer.

Followup sessions in Nashville, co-produced by Snyder and Grammy winner Phil Wolfe, saw the addition of hall-of-famer Joe Spivey on fiddle and mandolin, and Wolfe on Hammond B3 organ. For finishing touches, they returned to Baysound and added backup vocal performances by Taylor Opie and Vincent Colaiocco, and percussion by Garrett Dawson. Then they sent the album to classic rock legend Rodney Mills for mastering.

Cassie is a devoted mother of three, and a former All-American soccer player who still plays on competitive leagues while also coaching her sons’ teams. She brings the intensity of an elite athlete to her songwriting and performances, along with a high-energy personality that inspires everyone around her. Cassie’s life has been filled with triumphs and tragedies, and they’re all fair game as sources for lyric inspiration. A naturally talented musician, she and Rich collaborate on the arrangements, with him adding to the melodies and structure based on his many years as a performing guitarist. For this album, Rich played acoustic and electric guitars, but mostly focused on combining fingerpicking and slide styles on a resonator.

From the beginning, Cassie and Rich have been committed to “let each song take us where it wants to go.” The result is an album that’s fresh and delightfully hard to classify. Within the album, songs might group together as follows:

“Road Trip Americana” (rolling down the road, relaxing in the sun, getting things done): Tomorrow, Long Way Round, Turn the Page

“Retro Country Americana” (Hank Williams grooves with Cassie Jean sass): Ain’t Nobody Gonna Bother Me, Hold On Tight, We’re Going for a Ride, What Are We Waiting For

“Gulf Coast to Muscle Shoals” (roots rock with southern soul): I’ve Got You, All My Life, Grammy’s Chicken Soup

At a time when so many songwriters are using precise formulas to produce rose garden-uniform compositions, Cassie Barbaresi’s lyrics and melodies burst forth like a field of fresh wildflowers. Her songs are full of passion, promise, triumph, hope–and natural hooks that make each song pleasing and memorable.

“Heart over Head” is now available to buy or stream on most major music platforms worldwide. To learn more, visit cassiejeanandthefireflies.com.

Cassie Jean and the Fireflies

"...really swings and sounds as if they very much enjoyed making it. It is the sort of sunny music that would be the perfect accompaniment to a drive on a hot summer’s day through parched countryside."

"‘Tomorrow’ keeps popping up in your head and just makes you want to sing along with it in a most joyful way. As you might expect with country music, the lively music belies Barbaresi’s darker lyrics which deal with the joys but more often the sorrows of life. She writes poetically and in more detail than many songwriters.
https://americana-uk.com/cassie-jean-and-the-fireflies-heart-over-head

A&R Factory Music Reviews (UK)
"CASSIE JEAN AND THE FIREFLIES KEEP IT MOVING ALONG WITH THE FANTASTIC ‘MRS MAVIS’...a song that has you feeling like you are in a peaceful town where you don’t have to lock your doors and all the neighbours say hello. ‘Mrs Mavis‘ from the indie Americana, folk-rock, and retro country duo Cassie Jean and the Fireflies, is a wonderful new release that brings you back to the innocence of music made with that loving natural energy. There are only excellent soundscapes and glorious vocals on offer, with lyrics that shall get you feeling alright again. Pure music for the soul, is exactly what you will find here and for that, we are truly thankful."
https://www.anrfactory.com/cassie-jean-and-the-fireflies-keep-it-moving-along-with-the-fantastic-mrs-mavis/

Rock Era Magazine (International)
“Heart Over Head” welcomes you with loads of energy and beautiful melodies on “Mrs. Mavis”. Cassie’s powerful lovely voice with its fluid melody and backing harmonies supported by the violin’s melody mixed with upbeat percussions and mandolin all created a perfect opener. As upbeat and intense “Mrs. Mavis” was, things get mellow on the title track “Heart Over Head”. It has a smooth flow and soothing violins and acoustic guitar; it peacefully progresses into something slightly upbeat adding faster percussions before they decide to slow things down taking us to the peaceful outro all topped by the dominant vocal melody. Replacing violins in the cheerful breeze of joy “Tomorrow” with more guitars, Cassie Jean and the Fireflies started pushing the record’s dynamics again setting the mood for what’s next. “Sun Don’t Rise (Just to Hear You Crow)” unleashes Rich Odato’s guitar abilities with its bluesy sound. Odato lays his enjoyable guitar licks and solos everywhere in amazing harmony with the organ as they both dominate the song while Cassie shakes things around with a new rocking vocal delivery making it one of my favs.  They brought back their folk roots in “Turn the Page” and “Ain’t Nobody Gonna Bother Me”. Both have lovely grooves with some cool upright bass and energetic violins matching the cheerful lyrics and vocals channeling a lot of positive vibes to the listener. “All My Life” comes next at the perfect spot to offer something new in the “Heart Over Head” mix. The slow sweet love ballad mixed all their good traits, nice guitars, lovely violins, groovy percussions and bass, and for sure, the sweet sound of Cassie proving their musicianship and diverse songwriting abilities. They continue flexing their diverse songwriting talents with “The Remedy” which is basically a pure blues rock tune with maybe their best guitar work on the record. The rocking vibes are everywhere from the guitar riffs and solos to the playful vocal melody, especially at that super catchy chorus, I had this one on repeat for a while!

“Long Way Round” is another return to their folk base but with a twist with an exceptional beat and mellow relaxing slide guitar. The guitar/organ conversation returns in the cheerful tune “I’ve Got You” with strong percussion and bass presence. “What Are We Waiting For” and “Hold on Tight, We're Going for a Ride” are the record’s last folky ride before “Quick Trip to Hell” with its Alanis Morrissette meets Lynard Skynard vibes and nice guitars and drums lines. The record ends on a high note with “Grammy’s Chicken Soup”, it has a non-stopping groove that’ll keep you moving unintentionally till the end with its live vibes, enjoyable bass, and the tense, filled with chemistry conversation between guitar and vocal melodies.

“Heart Over Head” is well crafted, well written, and produced record. It shows that Cassie Jean and the Fireflies are seasoned musicians who are able to offer diverse sounds in harmony within the same record while maintaining their unique touch and influences. It is an enjoyable ride that left me waiting for their next release. Cheers!
https://www.rockeramagazine.com/album-heart-over-head-by-cassie-jean-and-the-fireflies/

It's Only Rock and Roll
“Heart Over Head” is well crafted, well written, and produced record. It shows that Cassie Jean and the Fireflies are seasoned musicians who are able to offer diverse sounds in harmony within the same record while maintaining their unique touch and influences. It is an enjoyable ride that left me waiting for their next release.
https://itsonlyrockandroll.info/cassie-jean-and-the-fireflies-heart-over-head-2022/

FV Music Blog (UK)
"‘Heart Over Head’ is one of the main reasons we hope the album never dies. It is a full body of work that takes the listener on a journey, and it needs to be heard in its entirety to be fully appreciated."
https://fvmusicblog.com/cassie-jean-and-the-fireflies-heart-over-head-album/Press review #2

Edgar Allen Poets Music Blog (US)
"A nice discovery that I recommend to everyone. The music is sincere and honest and carries with it these stories that have come to us carried by the wind. The musical arrangements and interpretation are absolutely flawless. Cassie Jean and the Fireflies have a great experience and maturity, and their compositional style manages to find inspiration from the past, but be modern at the same time."
https://www.edgarallanpoets.com/cassie-jean-and-the-fireflies/

Headbangers News (Brazil)
Heart over Head has lyrics and stories that leave you feeling optimistic and hopeful, but the real charm is the sweet and mesmerizing vocals of Cassie Barbaresi who knows how to walk through the instrumentation and of course the great chords of Rich Odato who plays guitar and resonator. The duo fits the same sound and charm of Blackmore’s Night with the same vibe, the couple of musicians create a perfect sound atmosphere to listen to on the radio, at home, at the bar or live, making the listener travel in each song. Cassie Jean and the Fireflies brings with it ancestral emotions and is the most beautiful band you will meet today.
https://www.headbangersnews.com.br/noticias/headbangers-news-indica-lancamentos-independentes-do-rock-e-metal/

Os Garatos De Liverpool (Brazil)
Presenting to the listening public an extensive work of 14 songs, they bring songs made with heart and soul, showing emotion in voice, instrumentals, lyricism and the way to tell each of the inspiring stories present in the tracks, with an unparalleled quality.
https://www.osgarotosdeliverpool.com.br/2022/04/10-eps-albuns-para-ouvir-e-conhecer-no.html